The Tibetan Sponsorship Scheme was established in 1988 to help support exiled monks at Sera Monastery in Bylakuppe, India. At that time the monks were escaping repression in Tibet, and to a lesser degree, this continues today.  The scheme also supports their relatives who live nearby in camps near the monastery.  Today the scheme sponsors over 920 Monks, Nuns, lay Tibetans in India, and 99 students at Gyalten Charity School, 63 Nuns in Nyagye and 79 in Hadu Nunneries in Tibet. 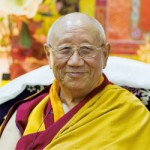 SUMMARY OF THE SCHEME

Tibetan Sponsorship Scheme which was established in April 2005 by Kyabje Khensur Kangurwa Lobsang Thubten Rinpoche, in order to fulfill the wishes of His Holiness the 14th Dalai Lama of Tibet.

Sponsors can correspond to those recipients in India, but often needs to go through a translator. The Tibet situation is much more difficult, and it depends on local political stability or restrictions in Tibet. Also many cannot speak or write English. 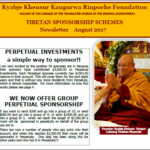 “I am happy to learn that the Tibetan Sponsorship Schemes which has been founded by Kyabje Khensur Kangur Lobsang Thupten Rinpoche since 1989 has been engaged in supporting monk as well as lay students amongst our Tibetan communities in India. And since 2000, after Khensur Rinpoche made a visit to Tibet, the Gyalten Charity School has been set up and over 300 hundred students are being sponsored. Today their sponsorship for Tibetans both in exile and inside Tibet number over 1300 students.”
“I want to commend the wonderful work the Tibetan Sponsorship Schemes is doing and wish it continued success.”  HIS HOLINESS 14TH DALAI LAMA (signed letter)

In 1959, because of the oppressive Communist occupation of Tibet, the late Kyabje Kangurwa Khensur Lobsang Thubten  Rinpoche (1925-2014) followed the exiled spiritual leader of Tibetan Buddhism, HH Dalai Lama, into India.  Over 6,000 monasteries in Tibet were  destroyed, including Sera Monastery, one of the most famous and largest in Tibet at that time. Many thousands of monks and nuns were imprisoned, suffering torture. As the cultural genocide of Tibetans continues, some still manage to escape, and live in camps close to Sera Monastery. This scheme provides food, clothing and medical assistance directly to Lay Tibetans in exile and some food, smaller items like tea, milk, flour, robes etc and some medical assistance to the monks and nuns.
The Schemes Founder, Kyabje Kangur Khensur Lobsang Thubten Rinpoche was a former Abbott of Sera Monastery.   The Lharam Geshe Scholarships Fund was his dying wish and this was established by his Attendant of some 35 years Nawang Thubten (Tenzin) in 2014 to fulfill this wish.  This fund supports the educational needs for selected monks entering the Geshe programme helping ensure Tibetan Buddhism survives. 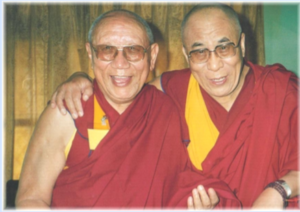 A Story of Hope…
A young man was walking along the beach at dawn. Ahead of him he saw an old man picking up starfish and tossing them into the water.
At last the young man caught up with the old man and asked him, “Why are you doing that?” The old man explained that when the sun came up, the starfish abandoned on the beach would die.
“But the beach goes on for hundreds of miles and there are thousands of starfish on the beach. How can your efforts make any difference?”.
The old man looked at the little starfish in his hand as he tossed it into the waves, he replied:
“IT MAKES A DIFFERENCE TO THIS ONE.”