Kyabje Khensur Kangurwa Lobsang Thubten Rinpoche (1925-2014), or simply Rinpoche as his thousands of students around the world affectionately call him, is a Buddhist Monk and also the founder of the Tibetan sponsorship scheme (formally Monk Sponsorship Scheme). 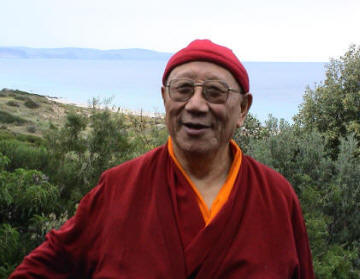 Ven. Kyabje Rinpoche was born in December 1925 to a farming family in the small village of Rinda in a mountainous valley of eastern Tibet (Kham) in what is now the Kartse (Ganzi) Prefecture of Western Sichuan. This area was the birthplace of many great lamas of contemporary times, including Khensur Rinpoche Urgyen Tseten, the late Geshe Ngawang Dhargye and the late Geshe Rabten, teacher of many leading western scholars of Tibetan Buddhism.

Kyabje Khensur Kangurwa Lobsang Thubten Rinpoche was not a recognized reincarnation (tulku). However, at a very early age, he displayed signs that he very likely was the reincarnation of someone of great spiritual attainment. Among these were an affinity for religious ceremonies such as pujas and for playing with torma, the ritual cakes offered in such ceremonies. One incident, in particular, impressed the people of his village. A man had become very sick, and was close to death. According to tradition, a fire and an arrangement of stones was placed outside his home. One day, the small child that would become Rinpoche, passed by the stone and fire arrangement, stopped and urinated on them, putting out the fire and spattering the stones. Miraculously, the man began to recover from that day.

He came from a family in which several members were ordained. When his mother died in his infancy, he was raised by an aunt who was a nun. At age seven, he entered Dhargye Gonpa to become a monk. There he studied well under the instruction of the renowned teacher Jampa Khedrup Rinpoche, teacher to many great lamas of contemporary times. At age 18, he made the arduous journey to Lhasa to further his education at the great monastery of Sera, one of the “three seats” of Tibetan Buddhist learning in the Gelukpa tradition founded by Tsong-khapa and headed by His Holiness, the Dalai Lama. He entered the college of Sera Je. 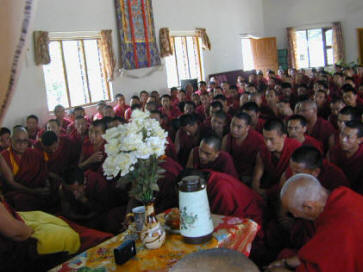 His education was interrupted in 1959, when an uprising against the increasingly oppressive Chinese occupation of Tibet failed, and His Holiness escaped to exile in India. Like tens of thousands of monks, nuns and lay people at that time, Rinpoche followed his spiritual leader into exile – in his case, into the refugee camps at Buxa.

The Indian Government was extremely generous to the Tibetan refugees, but still the conditions in the camps were hard. Used to high altitudes and cool climates, the Tibetans were physically shocked by the heat and dust of India, especially after the long trek out of Tibet. Most grew sick; many died. Monks from the four schools of Tibetan Buddhism were thrown together for the first time. While just trying to stay healthy or alive, the monks continued their study. Because it looked as though their stay in India might be a long one, some of the older students, such as Rinpoche, were also required to assist in planning the new monasteries that would be established in southern India. It was in these conditions that Rinpoche completed his Lharampa Geshe (Doctorate of Philosophy), the highest degree in the Tibetan system. 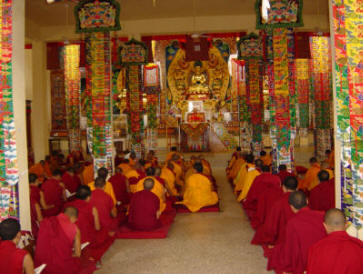 The new site for Sera Monastery was to be in Karnataka State, in southern India. The monastery, and the agricultural fields that would initially sustain it, literally had to be hacked out of a thick forest. The work was unbelievably hard. Disease was common and moved swiftly among the tents in which the monks lived. For the first few years, all they did was labour. Then a study curriculum was established and more and more monks were freed to study. Monks live in house groupings (khangsten) organized on the basis of their home region in Tibet. As a senior student and geshe, Rinpoche had a large role in establishing Tehor Khangsten, the house grouping for his region of eastern Tibet (Kham). Today, the monks of Tehor Khangsten comprise over half of the total population of monks at Sera Je.

As time went on, Rinpoche distinguished himself, not only as a scholar and administrator but also as a meditator. On the insistence of His Holiness’ Junior Tutor, His Eminence Trijang Rinpoche, Rinpoche made the great (three and a half year) retreat on Vajrayogini. 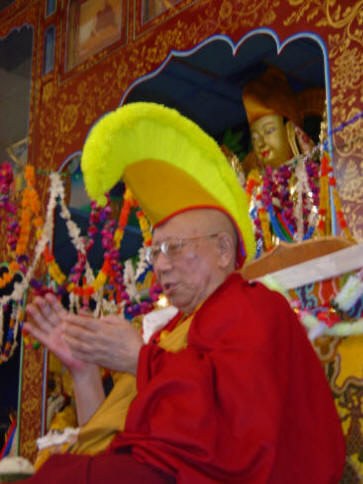 His scholarly achievements were recognized by His holiness the Dalai lama, who asked Rinpoche to provide the oral transmission (in 1972) of the complete Tibetan canon, the Kangur, to an assembly of monks at Dharamsala – a feat that is done about once a generation and takes about six months. The title Kangyurwa reflects this honour.

His administrative achievements include his election first as the Sera Je disciplinarian and then, in 1982, his appointment by His Holiness to be the monastery’s abbot. The abbot is normally elected by the senior monks of the monastery and then formally appointed by His Holiness. In this case, Rinpoche came second in the balloting, but His Holiness over-ruled the popular choice and selected Rinpoche. The title Khensur Rinpoche means ” former abbot”. In 1984, during his time as abbot, he restructured Sera Je School, which has resulted in an extremely high standard and diverse curriculum, achieving very exemplary results in examinations.

He was requested to come and teach at Buddha House in Adelaide, Australia, for a year, but stayed as the resident spiritual teacher for over a decade because he was begged by his beloved students to continue. Under Rinpoche’s guidance, Buddha House grew in stability, prosperity and educational strength. Because of his extremely high qualifications, advanced knowledge and spiritual insights so rarely found in Lama’s today, Rinpoche is often requested to teach interstate, overseas (in over 14 different countries) and at Sera monastery, where thousands of monks flock to hear him speak.

Whilst teaching at in Adelaide, Rinpoche did not neglect his monastery, however. In response the many requests from senior monks for assistance, Rinpoche established our monk sponsorship scheme. With over 1400 monks, nuns, Lay Tibetans in India and Nuns and Gyalten Charity School students in Tibet on the scheme (December 2007) and over 750 sponsors from 13 countries, the Tibetan Sponsorship Schemes is perhaps the largest and is certainly among the most successful schemes in the world today.

Rinpoche has also successfully helped to raise funds to rebuild his first monastery in Kham, Dhargye Gonpa, which was destroyed twice during the Chinese invasion and occupation. In addition, he has raised money to support the important philosophical debating program at Sera Je.

A major heart project of Rinpoche’s is Gyalten Charity School in Tibet for the poor uneducated Tibetan children in the region. This School has 281 children, and we have most available for sponsoring.

Rinpoche also set up the Emergency Medical Fund, which was established for any monk or lay Tibetan in India that is in urgent need of medical assistance.

Rinpoche passed away in January 2014 however his work is continued here and his dying wish was for the establishment of the Lharam Geshe Fund.

A wikipedia page is available at https://en.wikipedia.org/wiki/Kyabje_Rinpoche