Most of these Tibetan monks are refugees who were born in Tibet but have fled the Chinese Communist government and their regime or torture and genocide. They come into India with the clothes on their backs and without material possessions, often seriously ill, usually suffering from frostbite from their perilous journey over the Himalayas, and bereft of family support. The horrific stories of the sufferings endured by the monks at the hands of the communists, and also the horrendous trek over the Himalayas by foot in order to escape Tibet, is heart-wrenching. 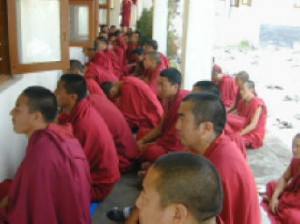 Many years ago, all the monks had to take care of their own food since the Monastery could not afford to provide even basic necessities such as food, clothing or books. Only a few monks were fortunate enough to get support from their parents, relatives or sponsors. Most of the monks were Tibetan refugees and did not have any relatives in India.

Even if they had relatives in India, they were too poor to be able to give any support. Many of them did not have money to buy even milk or tea. Some of them would eat very little. As a result, many monks either fell sick with T.B. or suffered from gastric problems. This often led to stomach ulcers followed by stomach cancer if not treated early. Many monks died due to stomach cancer.Because of these difficulties, many monks left the Monastery. Young men were reluctant to join the Monastery when they heard about these hardships; even though from the depths of their hearts they wanted to study.

The living conditions of the monks has improved tremendously since sponsorship schemes have been implemented, although many monks still suffer from gastric problems and many more serious diseases. The Monastery now to provides simple lunch and dinner for all the monks and they can finally focus their energy on their studies. Sponsorship helps provide one meal per day, and very basic medicines.

There are well over six thousand monks in Sera now who range in age from 5 up to 70+ years old.